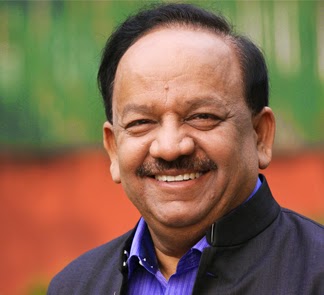 New Delhi,Dr Harsh Vardhan, Union Health Minister, has urged all states to take up malaria and dengue prevention on a war footing in the coming monsoon months. At a meeting today to review the steps already taken in the National Capital Region (NCR), the Union Health Minister said dengue and malaria strikes with sickening regularity every year resulting in many deaths. Prevention of this tragedy is easy only if the prevention protocol is implemented with commitment and monitored personally by the highest officials aggressively and pro-actively, he stated, adding that accountability must be fixed at all levels. Dr Harsh Vardhan said, “Let us make a new beginning. Let us not be complacent if the number of victims this year is less than last year’s. We must aim for zero incidence within two to three years.” Compared to 353 cases of malaria in 2013, Delhi has already reported 11 by June 30. Uttar Pradesh had 48,346 and 6,473 respectively for 2013 and up to June-end this year. Dengue has already claimed nine victims in Delhi, 89 in Rajasthan and 3 in Haryana. However, there have been no cases of death from the diseases so far this year. The Health Minister, who recently toured the United States where he had a four-hour-long meeting with experts at the Centre for Disease Control, said he is convinced that 80 percent success rate is assured if the well-known preventive steps are implemented. Aware of the necessity of bringing the states on board to give effect to his plan to eradicate preventable diseases, Dr Harsh Vardhan said he was keen to integrate into a strategy the success stories of states like Tamil Nadu and Karnataka where the incidence of vector-borne diseases has registered dramatic fall thanks to concentrated action and community involvement. He said he would also send central health officials to all the states to take stock of the situation on the health front through meetings with their counterparts. “There cannot be a one-size fits all policy. Each region is different and needs its unique solution. This will be discussed in the CCH,” he said. The meeting was attended by Mr Narendra Singh, the Health Minister of Haryana, Mr Rajendra Singh Rathore, the Health Minister of Rajasthan, Mr Najeeb Jung, the Lieutenant-Governor of Delhi, the Mayors of North and East Delhi, and senior officials of the health ministry and state governments. Mr Jung, said at the meeting that preventive steps are already under implementation in the capital. It has been decided to carry out a poster drive in schools, metro stations, bus stands and markets to spread awareness on the symptoms of dengue. Wards have already been earmarked in hospitals for the exclusive use of dengue patients, he stated. Dr Deepak Upreti, Rajasthan’s principal secretary (Health) told the meeting that apart from allopathic intervention, lessons should be taken from the Ayurveda where herbs and grasses prove highly effective. Dr Harsh Vardhan said he acknowledged the supremacy of Ayurveda and assured that the Department of Ayurveda, Yoga, Unani, Siddha, Homeopathy would be instructed to involve the synergies already available.